A COMPENDIUM OF ONLINE TOOLS 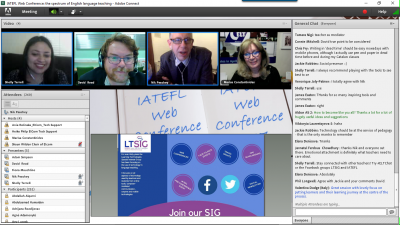 On 24-25 November IATEFL held it’s third web conference.  10 of the 16 Special Interest Groups took part, including the LTSIG on day one.  Links were collected during the session by former LTSIG joint coordinator and now chair of Elcon, Shaun Wilden. He also hosted and moderated the session along with our very own Marisa Constantinides, who introduced the three speakers. In addition, Elcon’s Ania Rolinska and Heike Philp provided technical support. At the time of a quick poll before the first session by the Research SIG, around 70% of the attendees were non-members of IATEFL, but this would have fluctuated during the remaining sessions.  A full recording of the session including the questions at the end is available now to all IATEFL (including LTSIG) members – here! Lucky participants who attended on the day were also offered a chance to download the publication, ‘Teaching English With Technology’, that has previously only been available to our members!

Nik Peachey used the spontaneity and creativity of jazz music, then an image from 2001 Space Odyssey to lead into a series of digital tools for creative writing.  He demonstrated Commaful for creative evocative products, by typing in text, add an image or video clips produce a short slideshow.  He invited participants to come up with a creative backstory for a bicycle which had ended up in a river. This activity came from Jill Hadfield’s chapter in a free British Council book on creativity in the classroom which Nik edited with Alan Maley. Nik also showed Writeabout for story starters.

The clickable Telescopic Text was used to demonstrate how even the most seemingly simple or boring thing can be an exercise in creative writing.  PrimaryPad is a piece of collaborative ‘paper’ which students can work on synchronously.  For a short clip demonstrating these two tools please click here. Finally, Stellar makes a professional looking book from images and text onto a mobile device.

A comment about having too many tabs open lead to Nik highlighting the new Mozilla Quantum browser as a speedy way of keeping track and curating open tabs. He subsequently mentioned his own curated Sccop.It page at the end as well as the work of the C group. 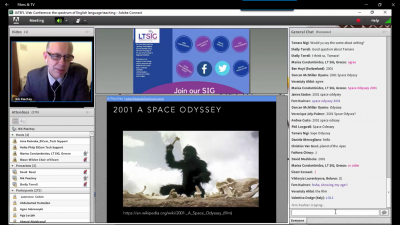 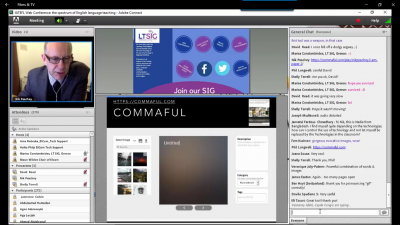 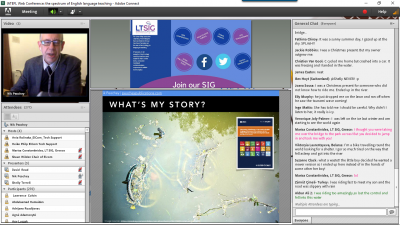 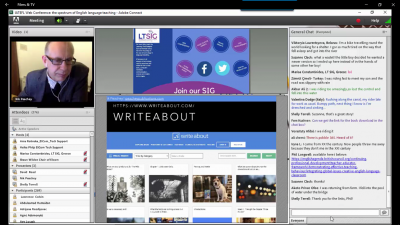 Shelly Terrell breezed through some great, free, lesser-known Google Add-ons.  These can all be found on her website here.  She first asked attendees what they get their students to do after they have completed a writing task. She described the next stage, which could include formatting, citing or dissecting their work, as ‘the really tough part’. If you go about things the wrong way, students could shut down, she argued. Google Add-ons, which come with Google docs, forms and sheets, can really help this process.  These tools can be useful across a wide range of different types of English teaching, such as EAP, ESP or CLIL.  Shelly walks her students through the process to give them the confidence in sharing their writing. Students can get very self-conscious about errors.

The add-ons can be found on a tab next to ‘table’, but you have to click ‘get add-on’, by doing a search or going with a suggestion. Shelly showed her saved ones – see the third screenshot below. 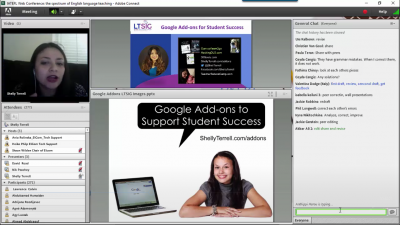 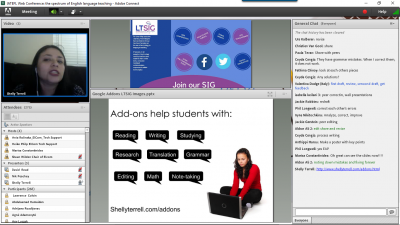 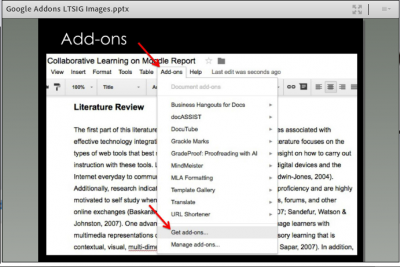 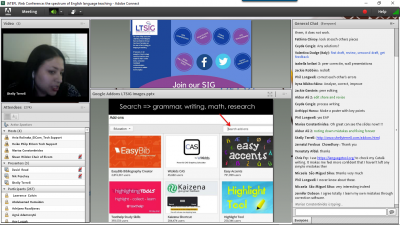 You have to launch the add-on, which then appears in a side-bar or a pop-up window. She demonstrated one of her favourites , a commentary/feedback/annotation tool called Grackle Marks which saves time. MLA Formatting adds a properly formatted header for MLA and there are bibliography creators, too. MindMeister creates spontaneous mindmaps.  Word Cloud generator does what it says.  DocAssist is a rubric tool which generates a downloadable pdf with an audio feedback.  It is an alternative to doing screen capture feedback and here is a short clip of Shelly describing it. DocuTube adds a YouTube link right in the document which opens the video so you don’t have to leave and return. FormMule for spreadsheets is a useful way to send an email to a hundred students or more by using an adjustable template.  Shelly also briefly mentioned some add-ons, such as Autocrat, for Google Forms. She finished by sharing her websites and social media accounts in her final slide before wrapping up and handing over to David. The University of Sheffield’s David Read presented a version of something which he previously shared at the LTSIG day at IATEFL conference in Glasgow 2017.  He demonstrated some tools used for creating interactive EAP (English for Academic Purposes) materials.   He started by highlighting the fact that since that talk, OfficeMix has since closed down so he had to abandon that tool and talk about the three remaining ones, Articulate 360, edpuzzle and h5p.org.  Course books can be quite dry and formal, he stated.  The university created effective EAP materials that would be relevant for their students and the courses they run.  He gave six justifications for using them as follows: reuseable content, easy to create, embeddable in VLEs (virtual learning environments), variety of interaction / quiz types, platform free and learner analytics. There is a short clip of him describing those here.

His personal favourite, Articulate 360, was used to create material to help students understand how to use the plagiarism tool, TurnItIn.  Articulate Storyline is a fairly complex piece of software but has a similar interface with PowerPoint or some video editors. David stated that it has many interaction types, very familiar interface, very complex scenarios that you can create.  It’s not a web service. You create it on your computer then upload to VLEs, or make it downable. It is flexible. On the downside, it is expensive, and it doesn’t work on mac!

H5p has a terrible name with a strange origin.  It is now open-source software for users to create their own content.  Clickable questions can be overlaid onto video, drag and drops for vocabulary, picture flashcards and lots of different content types, such as presentations, and listening activities. It has a 1990s style interface which is not very intuitive, but what it creates is impressive, according to David.

EdPuzzle is specifically for creating interactive video.  Watching and responding to lectures is particularly relevant to the EAP classroom. It allows you pull in video content from various sources such as TedTalks and Khan Academy.  Or you could search content that has been uploaded by other users and repurpose it for your classroom. An additional feature is that it can search for other users within a university domain, making it easier to share across the institution.

He summarised each of the tools before drawing the following conclusions and bits of advice: Homemade isn’t necessarily lower quality.  It may not look perfect, but content can be made more relevant to your students and more quickly than a published course book.  It is important to give teachers remission to work on materials. Use tools that draw on existing content. For example, use YouTube videos – you don’t need to reinvent the wheel.  Be prepared to invest a bit of money.  Ideally, keep your content separate from your tools, as some of these tools can close down.

After David’s presentation there was just enough time for a few questions to the panel. A full recording of the session including the questions at the end is available now to all IATEFL (including LTSIG) members – here. 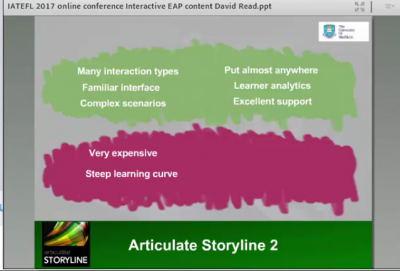