This is a brief review of ‘VR in the EFL class’ by Raquel Ribeiro and ‘Using immersive 360 videos to reduce language anxiety’ by Sarah Rogerson and Tom Booth. They were written by our Glasgow 2017 Roving Reporter, Will Leung.

Note: This is a previously unpublished review by our Roving Reporter at the conference. If you want to be a roving reporter for us at future events, look out for calls on social media and on this blog.  We’ll be announcing our P.A.R.K. conference roving reporter travel grant winner and IATEFL Manchester 2020 scholarship winner very soon.

Today was a really nice day. After the insightful talk by the plenary speaker Sarah Mercer this morning (for those who missed it I strongly encourage you to watch it on the IATEFL website), I attended a few sessions in several other areas and they were very interesting. However, the ones that really captivated me were the two consecutive sessions at the end of the day  – ‘VR in the EFL class’ by Raquel Riberio and ‘Using immersive 360 videos to reduce language anxiety’ by Sarah Rogerson and Tom Booth.

There are so many people saying that virtual reality (VR) will be the next big thing in EdTech. While we know VR has enormous popularity in the video game industry, many teachers (me included) are not sure how they can incorporate this new technology into their classroom. Raquel, Sarah and Tom are pioneers of using and developing VR / 360 videos in education and this was an excellent opportunity for us to learn from them.

VR in the EFL class’ by Raquel Riberio

Raquel was last year’s LTSIG scholarship winner and she came back this year to share something she is passionate about – using VR in EFL classes. Being a Google Innovator she told us about her involvement in the Google Expedition project in Brazil and her experiment of using VR with her students. 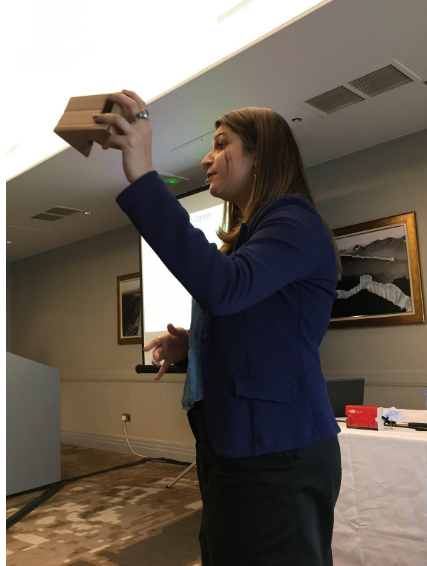 She started this with the following questions in her mind:

She then gave us a few examples of how she utilised VR in the classroom. Her students were taken to incredible adventures like visiting castle Neuschwanstein in Germany, pyramids in Egypt, and even the moon! From the videos she showed us, we could feel how excited her students were when immersing themselves in VR.

Raquel also mentioned some important points we should note when using VR in our classes:

Immediately after this session I joined Sarah Rogerson and Tom Booth, both of whom are from Cambridge English. They also talked about VR, but in a slightly different way – they shared their experience in developing 360 degree videos to lower students’ anxiety, particularly in speaking exams. We understand how nervous it can be for students when they are taking speaking tests, so that’s why Sarah and Tom introduced to us an ongoing project by Cambridge that makes VR speaking practice videos for students. They recorded some short 360 degree test video clips, conducted global trials with 60 candidates, invited them to complete some anxiety surveys. Sarah said that they ran into a wide range of technical problems during the trials, so the program is still being developed and tested. Nonetheless the results they have got so far are very positive, with students saying that the videos can make them feel more comfortable for their exams; they can encourage English learning and increase their confidence. Cambridge was generous enough to give each of us a 360 cardboard. I watched the test videos by Cambridge after the session. It’s very much a work in progress but I believe it is an innovative solution to a problem that has been existing for so long.

Raquel, Sarah and Tom are pioneers in using technologies to innovate and we need more people like them.

Click here for more information about the Cambridge 360 project.

Bio: I am from Hong Kong and have been teaching English since 2010. I have a CELTA, Delta and an MA in Applied Linguistics. I am particularly interested in the use of technology in and out of the classroom to improve teaching and learning. I don’t read newspapers, but now I have become a roving reporter.